In writing this page on CommuniCore, we came across a wonderful blog entry from “Disney Shawn” that I really felt captured the essence of the attraction, and not to mention puts to shame anything I could come up with. Very special thanks to Shawn for allowing the use of photos from his blog, as well as this content!

The attraction we know today as Innoventions traces its roots back to the opening of Epcot. The semi-circular buildings in the heart of Future World were originally home to CommuniCore. Similar to Innoventions, CommuniCore was a place where the park’s operating participants could showcase their latest innovations or dive deeper into a subject than could be accomplished in the ride-through attractions.

Short for Community Core, CommuniCore featured hands-on exhibits, information centers, and minor attractions. Among the highlights of Computer Central were a Build a Roller Coaster terminal (using simple computer graphics, you could then “ride” your creation) and SMRT-1 (below), a little purple robot who played simple question and answer games with Epcot Guests using an early form of speech recognition.

Along the back wall of Epcot Computer Central was a long ramp which led up to the second-floor entrance for the Astuter Computer Review (later called Backstage Magic). In this show, Guests peered down into the large, computer-filled room which operated all of EPCOT Center. With a little Disney magic, our host (later hostess Julie) would appear to shrink down and walk across the tops of the computer cabinets, explaining how everything worked. The show was fascinating in its day. Of course in 2009, everything done in that room could probably be accomplished with a MacBook Pro.

At the nearby Energy Exchange, presented by Exxon, Guests could stand alongside an enormous piece of oil shale or crank away on a handle to see just how much human energy would be needed just to illuminate a few lightbulbs.

Across the way in CommuniCore West could be found FutureCom, presented by Bell System (later by AT&T). The visual icon of FutureCom was the Fountain of Information, an ever-moving sculpture of modern media, representing the constant flow of information and entertainment available in 1982.

Elsewhere in FutureCom, Guests could try their hand at managing AT&T’s “complex” telephone network. The area also featured a number of interactive games using touch screen technology. Touch screens were put into use throughout CommuniCore, as well as with the World Key Information terminals located at several points around EPCOT Center. Every time I use my iPhone at Epcot, I think about my own first experience with touch screens in that very park and how amazing it is that I can now carry one in my pocket. We really are living in the future!

At the Electronic Forum, Guests responded to a series of questions using buttons on the arms of the theater seats and could see the poll results in a matter of minutes. In the early 90s, Electronic Forum also served as a voting location for the Person of the Century poll, an initiative sponsored by Disney but abandoned a few years later when it looked like Walt Disney himself was receiving an overwhelming majority of votes. While a good argument could be made for Walt Disney as one of the most significant individuals of the 20th century, announcing him as the Person of the Century might have appeared self-serving. In 1999, the Electronic Forum and Centorium gift shop were merged to form Mouse Gear.

The Stargate Restaurant and Beverage Base became Electric Umbrella. Across the way the Sunrise Terrace Restaurant was converted to Pizza & Pasta for a while, but is today the spot for FountainView Terrace and the Epcot Character Spot.

The space labeled Robot Show below has housed a number of short-lived experiences. In the first year of EPCOT Center’s operation, the building was graced with a billboard for the TRON Arcade, a feature which was never added. After the Robot Show closed, the Walt Disney Imagineering Labs were located here, offering Guests an opportunity to test drive an Aladdin virtual reality attraction (eventually added to DisneyQuest). The front side of the space now is home to Club Cool (a recent update on Ice Station Cool) where international Coca-Cola products can be sampled. On the back side, the most recent tenant has been the Epcot 25th anniversary exhibit.

Most notable among the features of CommuniCore was EPCOT Outreach and the Teacher’s Center, where Guests and visiting educators could pick up all sorts of additional information about the subjects presented within the park – although information about the park itself proved to be one of the most sought-after topics.

EPCOT Outreach moved around a bit over the years. At one point it was located in CommuniCore East as part of the Electronic Forum area. Later, it was moved to the present-day location of the Epcot Art of Disney shop, where it was known as the Epcot Discovery Center, and the Teacher’s Center found a new home upstairs.

With the growth of the Internet in the 21st century, EPCOT Outreach’s original Guest service mission became less relevant, and the location was closed. The internal research functions EPCOT Outreach provided for the Walt Disney Company have been carried on, however, with the Walt Disney World Library and Research Center, still staffed today by dedicated Cast Members who once worked in CommuniCore at Epcot.

What remained of CommuniCore was replaced by the first iteration of Innoventions in 1994. In that version, Innoventions was a far more chaotic presentation than it is today, having been inspired by consumer electronics shows. The opening of Innoventions also brought to the area the dancing fountains and colorful kinetic sculptures, designed to add some motion and interest to the center of the park. The Innoventions attraction was streamlined in 1999 with the introduction of the “Road to Tomorrow” and mini-matronic host Tom Morrow 2.0. Tom has since moved on to delivering weather reports on TNN (part of the pre-show for Stitch’s SuperSonic Celebration in Tomorrowland at the Magic Kingdom), but the “Road” concept remained part of Innoventions until it was ultimately closed. 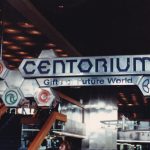 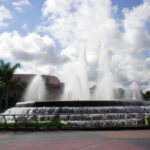 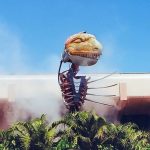 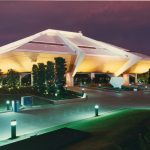