Located in Future World East, the Horizons pavilion opened exactly one year after EPCOT Center (1983). It focused on the future, and the future family. It was different from other Future World attractions in that the entire pavilion housed only it’s namesake attraction, with no preshow, post-show, or gift shop. One of the largest and most advanced attractions at EPCOT Center, Horizons looked back at what we envisioned the future would be throughout our history and then into the future through the 21st century. The ride focused on a familiar theme to fans of Walt Disney: If we can dream, we can do it.

After a visit to Jules Verne and a look at our vision of the future from the 1950s, guests entered a large theater with two large “OmniSphere” screens depicting discoveries that would impact us throughout the next century.

Moving on, the ride took it’s passengers through EPCOT Center’s view of the future… the 21st Century future. A future home, a desert farm growing orange trees, an underwater city, a space colony and finally a return to the present (20th Century).

It was on this return that guests were introduced to a unique ride experience: the ability to chose their own ending. For the return to the 20th Century, panels inside the omnimover vehicles would light up with options to be chosen from for the return. Guests could choose either land, sea or space for their return travel.

Though there is much speculation as to the reason for its closure (everything from maintenance cost to the building sinking into the ground), Horizons closed it’s doors in late 1994 after over a year of being without its sponsor, General Electric.

Another unique feature of Horizons? It didn’t remain closed!

December 1995: Horizons reopens after a year of literal dormancy. There was no refurbishment or retooling, it simply reopened. Why? At the time, both the Transportation and Energy pavilions were closed for refurbishment. If Horizons had remained closed, only the Wonders of Life pavilion would’ve been open on the East side of Future World. So, it was decided to bring the pavilion and it’s star attraction back to life for the duration of the other refurbishments. A duo known as Hoot & Chief used this time to uniquely capture every aspect of the attraction they could before it was shut down once again. Check out their adventures at Mesa Verde Times.

January 1999: The Transportation pavilion reopens with its new attraction, Test Track. Now that there was something to keep guests occupied on the East side of Future World, Horizons could once again be shut down.

September 1999: After being closed for over 9 months, the Horizons signage is finally removed. To guests, this was the final sign that the ride had reached its end. Or had it?

October 1, 1999: Horizons reopens to the press. It was a move that created a lot of buzz amongst its fans as potentially meaning the ride would have another chance at life. While this proved that the closure was once again just a 9-month long dormancy, it did not result in good news for its fans. Though the pavilion remained intact with both music and lighting, it would not again be opened to guests.

March 2000: Horizons begins being emptied of it’s existing ride vehicles, animatronics, and props. A month later it was announced that the replacement attraction, Mission: SPACE, was so large that the existing pavilion would need to be demolished and a new structure built to house it. Just a few short months later, the external structure began coming down in true demolition form, sometimes appearing to have collapsed. The typical refurbishment walls were up with signs saying “Watch this SPACE for a Future Announcement” and as demolition continued, foliage was added behind the walls to hide some of the destruction. By October of 2000, the land was ready for the new Mission: SPACE building.

As the new building began to take form, it added fuel to some of the circulating rumors as to why Horizons had closed. Though it was announced the reason for the demolition was due to the building not being large enough, the new pavilion was significantly shorter and had a smaller footprint. While never officially confirmed, when the land was finally cleared there was a large hole visible into which large steel structures were being placed. While it continues to be highly debated among fans of the attraction, many believe that a large sinkhole under the southeast corner of the building is the reason for the closure.

Many of the props from the attraction still live on in second lives at other Disney parks. Though officially stated to have been sold or dumped, ride vehicles have been known to pop up on sites such as eBay or Mouse Surplus from time to time.

Widely acknowledged as one of the most missed attractions to have become extinct, Horizons still to this day lives on through a myriad of references in other attractions. Among these are references in Space Mountain, Mission: SPACE (logo in the center of the wheel in the queue), Star Tours, and Disneyland’s Innoventions. Additionally, a flower bed in front of the Mission: SPACE attraction closely resembles the shape of the logo/building.

The gallery below features images provided courtesy of DreamfinderGuy who made an inquiry with General Electric’s Corporate Archives and received these photos in return. They feature some unique shots from planning, construction, and design, as well as the ride itself. 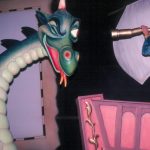 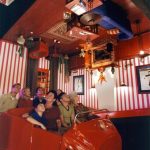 Journey Into Your Imagination 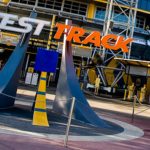